I did it! I survived! My calf survived! I’m so excited to be on the road to recovery!

Pre-race
I walked Eric and Phil over to the race start. They started an hour before me so I had time to spare (and worry). I hate having to wait! I went back to the hotel for a bit since it was across the street and got my things organized before I headed back to the starting area. I don’t mind running by myself. I actually enjoy being alone but before the race, I don’t like being by myself. It is very lonely. They close the starting area 20 minutes before the actual race. That is a bit annoying! I sat on a truck bumper just taking it all in. This was the largest race I have every participated. There were over 10,000 people in my starting coral and we were the third corral! I talked to a nice lady from North Dakota for a bit. It was her first half marathon. As the race time grew closer, I started making my way into my corral. I talked to a bunch of people from Canada. They were from British Columbia and Yukon.

The Start
By the time we started it was dark but still warm. I’m not a big fan of running in the dark but I had 3+ hours to get used to it. When it is our time to go, the start banner shoots off fireworks. Cool! The first mile was heading south towards the famous Las Vegas sign. We made a turn around and finally were heading toward the strip. I don’t remember much of the first mile. It was very crowded and there were a ton of walkers in my corral so I was constantly weaving and stopping. I ran the first 5 minutes slowly and felt good. I had various run/walk strategies that I contemplated. But I eventually settled on 1 minute run, 30 seconds walk for my intervals and adjusted as I see fit. I did that for the first 2 miles until I ran into some ladies form Seattle. I kept passing them and they kept passing me. Finally one of the ladies asked if I was doing intervals. I told her what I was doing. They were doing 30 seconds and 30 seconds. I thought, you know what, I’ll run with you guys for a while. It was nice to talk to somebody and it kept me accountable. When they ran, they ran fast, well faster than I have been running the last 3 weeks. Ha!  During mile 4 we ran past Bellagio and the water show was playing. It was one of my favorite songs, Con Te Partir.  It made me so happy. I ended up staying with them through mile 4 and I had to let them go. If I wasn’t injured and worried about finishing, I would have stayed with them. I think if I would have been properly trained I could have kept up with them most of the race. Funny thing is they made a pit stop during mile 5 which I didn’t notice and the passed me again. It was so nice to hear somebody yell my name as they ran past me. The first 4 miles went better than planned. I hoped to keep them under 15 minutes and I was successful.

The Middle
After I said goodbye to my friends from Seattle, I slowed down quite a bit. I tried to keep my miles around 15 the best I could. I figure the longer I can stay at or around 15, the better my chances of finishing would be. During the whole race, I kept thinking about my calf and wondering when it was going to blow out. I had done all that I could to heal it but I still was fearful. I’m such a pessimist! Mile 5 was past the Mirage (and finish line) and the Venetian. The smell of chlorinated water filled the air. We also ran past the Wynn hotel. They too have a water show but not on the same level as Bellagio. Mile 6 was kind of blah. We ran past Circus Circus and the SLS. In our sight most of the way was the Stratosphere which we finally got to during mile 7. This also meant we were getting close to the bad part of the race. If you been to Vegas, you know what I mean. It is the area between The Strip and Downtown. The sleazy wedding chapels, the crappy motels and seedy pawn shops.  Most of mile 7 and mile 8 were not a highlight of the run. LOL! As you can see by my times, I was pretty close to my goal of 15 minutes miles.

The End
Continuing with the crappy miles, mile 9 was just as bad as 7 and 8. This part of the race you turn away from the excitement of Fremont strip and head into an industrial/government building type of scenery. I dreaded this part of the race from the moment I signed up. It was very dark on these side streets and they did their best to put lights up but it was not fun. A black woman was live on Facebook and she was cracking me up. She saw that I was laughing and asked me to come on over and say “hi” to her followers, which I did. It was really the only highlight of mile 9.  Mile 10 we eventually made it to Fremont Street but turned just before the cool part. Boo! As you can see by my times, this was a rough patch. My time slowed considerably. But since I couldn’t train for 3 weeks and my longest run was a 10K 4 weeks ago, it doesn’t surprise me. We were finally back on The Strip heading towards the finish. The entire mile 11 had the Stratosphere in our sights. It was nice to see it but for some reason I never seemed to get any closer. LOL!  It was during this mile I started talking to a couple from Chicago. I had been piggy backing them since like mile 5. They would get ahead of me and then I would past them only for them to past me again. I finally started a conversation. They started running 2 minutes, walking 2 minutes. By the time I started talking to them they were on running 1 minute and walking 2. They were tired too. Also during this mile I made some women very happy. They were talking about how they can’t believe how long mile 10 has seemed. I looked at them and said that were over a half a mile past the mile 10 marker. They were relieved. They missed it. HAHA!  I finally made it to the Stratosphere at the end of mile 11. I was so happy to be back on the fun part of The Strip. So much so I said “Fuck it! I’m walking” And so I did for mile 12. I was exhausted and really didn’t feel like running. I did a few short bursts here and there but really I just walked it. It was starting to get interesting. It was around this time the marathoners rejoined us. I was amazed at how fast they were running but it didn’t encourage me to run. Ha! I kept my head up and just took in the sights. It was fun to just not care anymore!

The Finish
Mile 13 was really slow. I don’t remember much about the last mile. I was just focused on finishing. I know we ran past the Wynn again, and again their water show was going. We ran past Treasure Island Casino and I thought to myself that the Mirage was much closer than it actually was…but maybe that was my runner brain. I got close to the finish line and saw the Volcano was erupting at the Mirage. Always a fun thing to watch. I was kind of in LaLa land. And there it was the finish line. I could see it and I was so excited. I got a bit emotional and started crying. I haven’t really cried at a finish line since my first half marathon but I think it was overwhelming feeling of “how the heck did I complete this considering the pain I suffered the last 3 weeks?” It was the amazement that my body was able to carry me this far even though it was so broken. What can I say, I was an emotional wreck!

After Party
I have to say for the amount of money I paid for this event, the food afterwards was terrible. The bananas were just mush, you couldn’t eat them. There wasn’t much else for food. They had chocolate milk, yuck! And Gatorade, Yuck! But no chips or other fruit, come on not even oranges? It was very disappointing.

We waited about 45 minutes for Phil to complete his marathon before made the long, slow, painful process of going back to the hotel. It took us quite a while. We stopped at the food court in Bally’s for some pop. I was waiting to get back to the hotel before I was going to eat food. We eventually got to the hotel, it was almost midnight. I had a cheeseburger and fries for a midnight snack before turning in for the night.

I don’t like running at night but this race is the exception. I wouldn’t want to run this course during the day. It would be hot and not as exciting. It is definitely better as a night race. I had the normal pains afterwards. Surprisingly, my left ankle hurt the most. My calves were not too sore. I guess the compression sleeves did their job! Obviously it wasn’t my best race but considering what lead up to this race, I’m happy with my time. I told people it would probably take me most of the 4 hours. Well it didn’t I had 36 minutes to spare. 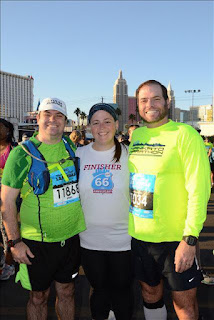 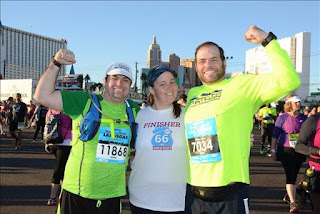 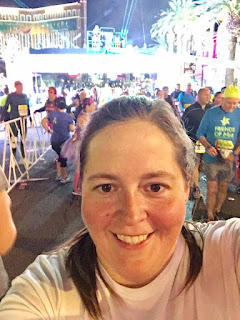 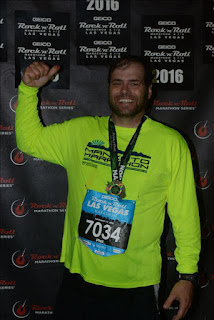 Posted by KimmerBee at 5:40 PM