Pork Power 5K
Friday night was the Pork Power 5K. Like last year, I walked it with Mike. We were slower this year but he had a bum knee and hadn’t been walking much lately. It was ok, it was a nice walk. It was the same course as last year except they added a .15 of mile at the end so it was closer to a true 5K this time. I learned from last year and did not take any bacon. At the finish they had pork chops, they were pretty good. We stood in a long line for bananas and chips and then left for dinner. We celebrated our race finish with a nice dinner at Bonfire with Danielle, DJ and Abbie. 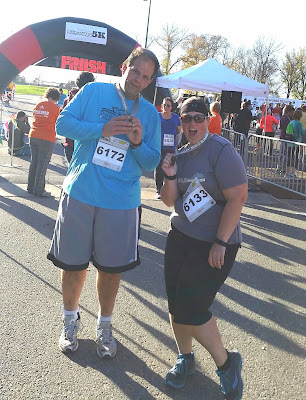 The Injury
So after Bonfire we went back to the hotel and use the hot tub. Well, silly me fell and hurt my foot.  It turned purple instantly. See… 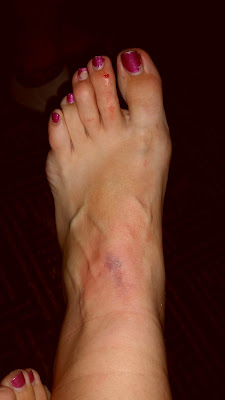 I was so upset, I wasn’t sure I was going to be able to run the 10K. It hurt so badly and the swelling was awful.  I iced it right away and on the way to DJ’s house we stopped at Walmart (it was 9pm, who else open at that time would have KT Tape?). We got some Advil, lime green KT Tape, ice pack and Band-Aids.  We got to DJs and I iced it one more time and watch the How To video for taping for foot pain. I only wasted a couple strips of the KT tape before I nailed it.

The 10K Start
DJ dropped us off at the start and took our car to volunteer at mile 10 of the marathon. The morning was cold like last year but not nearly as windy. It was almost the same course as last year except for one exception at the end. The beginning was flat and straight.  There is nothing exciting to report for the beginning of the run other than my foot didn’t hurt! It was amazing!  But tragedy struck at mile 1.5. My trusty Garmin shut off and restarted. When it came back on it was still tracking my run but it was freaking out. It was beeping for the intervals all wrong. And when I stopped it shortly after it said that I ran 2.5 miles in 16 minutes for a pace of 6:24…I wish!  I had no choice but to stop my watch and restart it. After I did that it worked fine the rest of the way.

The 10K Middle
So after the watch fiasco you would think I would be freaked out but I took it in stride. My foot felt good; there was nothing that was going to discourage me now! At the water stop, I took a couple of sport beans with the water.  At mile 3 my Band-Aid must have come off my toe. I knew it instantly as the pain was intense. I kept at it! I wasn’t going to stop because of my toe.  I wiggled my toes to see if I could get it to at least cover the open sore. It must have worked because the pain went away temporarily.  Right before mile 4 was the start of the long hill. Oh how I love this hill. My pace was under 10 for the hill, my half a mile split for the hill was under 5 minutes!  It was awesome. And the amazing thing is I ran that fast with my shoe untied. Yep, my shoe untied running down the hill. There was no way I was going to stop! I passed so many people and a few told me it was untied and I said I’m not stopping until I get to the bottom. Zoom, Zoom! As soon as I got to the bottom of the hill I tied my shoe.

The 10K Finish
Like I said this course was the same as last year except for the finish. They made us run up a hill…granted it was a short hill but it was at the end of mile 6. I walked it and sprinted to finish. My time was slower than last year but was my fastest this year!  1:11.04! 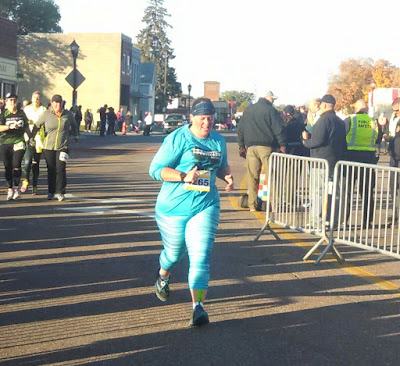 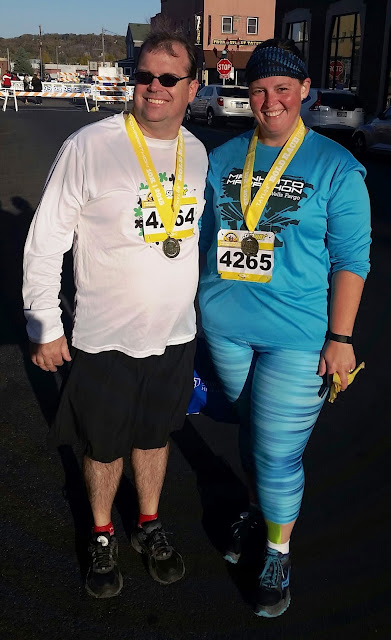 Posted by KimmerBee at 5:25 AM