The summer concert series is done. Yay! I love playing in band and I like the concerts but I have to say I'm glad it is done. Like I said before we had a concert Sunday at Centennial Lakes and last night at Starring Lake in Eden Prairie. I even played 1st Trombone last night. Yikes!

On Sunday we bought a new TV stand from Ashley Furniture. I love it but I was very upset that it was "Made in China"....WHAT??? CHINA??? Ok like half of my high school class works at Ashley in Arcadia, WI. SO seeing "made in China" kind of pissed me off. But I digress....Our TV looked so silly on the little stand, now it looks cool.

Monday I got an email from Guthrie Theater saying please come back. So the deal was I could get tickets for the Gilbert and Sullivan's "HMS Pinafore" for $20! Cheap!! So we went Tuesday night. It was great. The story is hilarious...click here to see the info on the musical. This play has a special place in Eric's heart as one of The Simpsons episode featured the music from this play, plus it was the play in one episode of Mr. Belvedere and Family Guy made a reference to it too.

1 day until Eric's birthday!!!
Posted by KimmerBee at 8:58 PM No comments: 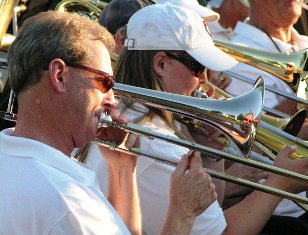 Posted by KimmerBee at 11:59 AM No comments:

Wow, it has been a while since my last post. The rest of the Rapid City trip went great. We tried to go tubing down Rapid Creek on the 105 degree day but unfortunately our tubes were too small. But Allista got a taste of tubing and I think she liked it. We split the drive home into two days. Eric was driving his mom’s 1989 VW Fox back to Minnesota. It made for a long trip across the state. I let Eric lead, well the speedometer was off by about 5 to 10 so we drove across the state at 60-65 instead of 75 and it was HOT…90 some degrees the whole way. We stopped in Sioux Falls at Byron and Paula’s apartment for the night. We played some tennis (Byron was my partner and we lost..because of him) and went for a swim. We drove the rest of the way home the next day, July 1st. Of course the MN gov’t was shutdown so heaven forbid I have to pee. All rest areas were closed. How lame!
We got home in time to relax a bit before my family invaded. We went to the Twins/Brewers that night. It was so hot and miserable but than an awesome storm came through and the temp dropped 30 degrees. Unfortunately there was a 2-hour rain delay so the game didn’t start until 9:10pm. It made for a very long night. Allista’s book didn’t come out until the 4th or 5th inning which means that she probably could have made it through the whole game if there wasn’t a rain delay! The rest of the weekend we went mini golfing at Centennial Lakes and went to Valleyfair. We also had a picnic with Greg and Celeste. My family went home early on the 4th. So it was just Allista and Danielle left behind. We went to my 4th of July concert in Eden Prairie with Greg and Celeste. All and all a very fun holiday weekend.
Allista had the rest of the week to herself as Eric and I had to go back to work. She beat the Paper Mario game for the Wii. It took her like 25 hours. On Saturday, Allista and I went to the North Mankato Parade to see Beth march with the Lancers. It was really long parade. We had to leave after 2 hours (!) as I had to get Allista to the airport. I must say it is very weird going through security at the airport but not going anywhere. It was kind of sad, I looked at all these people going fun places and the only place I was going was back home. Allista made it back to Pahrump and I’m sure is enjoying her little brothers again. J
Sunday was great…after 3 weeks with family of some sort it was nice to just sit home and do absolutely nothing. But I got bored really quick and we had to go shopping. Much to Eric’s displeasure, I just can’t sit still!
More car trouble…while driving home from working out Monday morning, the Kia died on me…right on the corner at a busy stoplight…how annoying! Eric came to my aid and so did some of the guys I see at my morning workout. They pushed the car into the gas station, called AAA for a tow and surprisingly I was only 30 minutes late for work! $1,200 later and the Kia works again. Other than that this week has been pretty uneventful.

Posted by KimmerBee at 8:57 PM No comments: