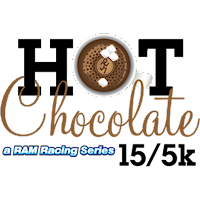 The sun melted me as much as the melted chocolate at the finish. I started out strong but it ended in disappointment. That is my short recap of my 2016 Minneapolis Hot Chocolate 15K Run.

I know that I shouldn’t be too disappointed in my performance considering I have not trained in heat yet this year. I mean for crying out loud it was only 20 degrees just a week ago for my amazingly fast Goldy’s 5k run. All my runs leading up to this race (including one a few days before the race) were in 30-40 degree weather. So yes, when your first run in the heat for the year is a long race and the starting temp is 65 degrees, warming up to 78 degrees by the time you finished, then yes, you will probably have a crappy run. Ok…on to my report.

The Start
This race description says, “The Hot Chocolate 15k/5k Minneapolis course highlights the city’s biggest attractions.” Puulleeeze. The first 6 miles is in NE/N Minneapolis which is heavily industrialized. The map makes it look like you are running along the Mississippi river but there are big dilapidated buildings in your way. We get to run past such awesome places like the: Packaging Corporation of America, Siwek Lumber and Millworks, Marshal Concrete Products, Xcel Power Station, U-Hual and my personal favorite the Minneapolis Oxygen Company. You better believe all runners joke about that place. There are SO many nicer places to run in this great city….NE Minneapolis is not one of them.  They only excitement the first 6 miles is the Ferris Wheel around mile 1.5.

Anyways, the first 3 miles went really well. I had some issues at the first water stop and walked a bit more than I’d like. I was already overheating and dumped a couple waters over my head. I still managed to knockout miles 1 and 2 with a 12:08 pace. It was great. I was passing a bunch of walkers and got ahead of the 13 minute pacer (she started in the wave before mine!) Mile 3 was a slower at 12:34. But that included a nice long, slow run up a hill, I mean bridge, over the Mississippi River and I-94. I took a few Honey stingers during the third mile which I later regretted.

The Middle
The 5K marker is on the bridge described above and after the bridge is water stop 2. This was just over a mile from the first stop so again I drank some water and poured some over my head. It was so hot. I grabbed some M&Ms…I really shouldn’t have…they didn’t go well with the Honey Stingers I ate 10 minutes earlier. I got an upset stomach right away and it never went away. So running 6 miles in the heat with an upset stomach isn’t my idea of fun. I tried to drink some Tailwind (electrolyte drink) but that made matter worse. So I stuck to water the rest of the way. Around 4.5 miles I got a piercing paining in my calf.

Great, I’m hot, I have an upset stomach and now my leg hurts. This wasn’t my day.

My pace was getting worse and I wasn’t sure I could run much longer so I slowed down…way down. Mile 4 was still under 13 at 12:47. I’m actually surprised I did as well on miles 5 and 6 (13:20 and 13:29) considering all that was going on with me. I was determined to finish even if I had to walk the whole way! Another annoying thing about this course is there are plenty of water stops early but after mile 3 you are lucky to have one every 2 miles. Thank GOD I had my hydration belt. I’m pretty sure I was dehydrated most of the race but it would have been worse if I didn’t have my belt! The 13:00 pacer caught up to me and I decided I’d run with her for a bit. She was doing intervals of 2 minutes run, 1 minute walking. I didn’t stick around her very long because the one minute of walking was too much. I wanted to get going. My 10K time was a bit slow at 1:20 but not bad considering the crap I was dealing with.

The End
During mile 7 the 13:00 pacer finally passed me for good. I was mostly walking by this point. Or I should say limping/running. My time was 13:54 which means I did some running. Mostly it was 15 seconds here, 30 seconds there. I ran until my leg hurt and then walk until my leg hurt and then ran again because when I would start doing the opposite of what I was currently doing my leg would temporary stop hurting. Ha!

I got to the last water stop at 7.5 and took 4 glasses. 2 for my head and 2 on my walk over the Stone Arch Bridge. I caught up to some of the girls that were part of the 13:00 pacer group but fell off. It was Susan from Dallas, TX (she was struggling with the heat too!) and Cindy, who works at the U of M. We would run for a bit, like run to the end of the bridge, run to the stop sign, run to the shade under the bridge, etc. LOL! We chatted and walked pretty fast. I still kept a 15:30 pace for the last two miles. I had done this course before so I knew about the horrible hill just after mile 9. We walked up the hill and sprinted down to the finish. The three of us stuck together the entire way. It was kind of nice. My finish time was 2:06.47. That is over 10 minutes slower than last year (which was 20 degrees cooler!).

My upset stomach really didn’t subside. I ate my banana dunked in melted chocolate and a few pretzels but I was overheated, exhausted and in pain. I was so upset at my performance. I was expecting this race to be awesome. I had such great training runs leading up to it including that awesome 8 mile run a few weeks ago. I thought for sure I would crush last year’s time but in the end the weather, my leg and my stomach got me. :( 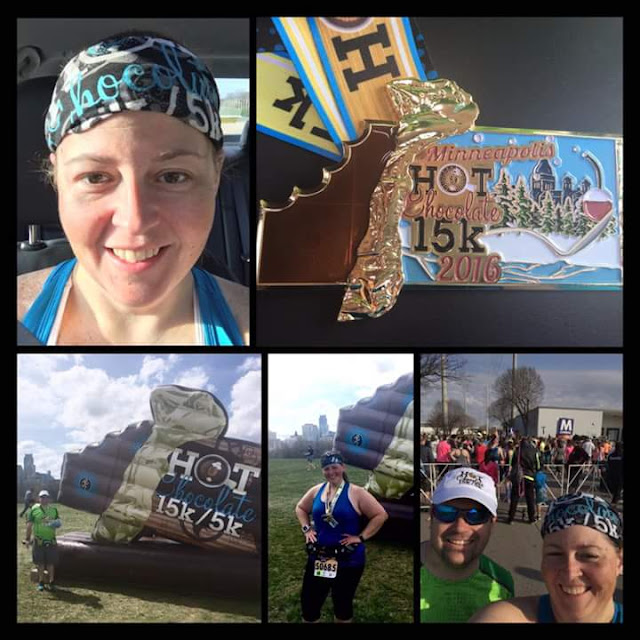 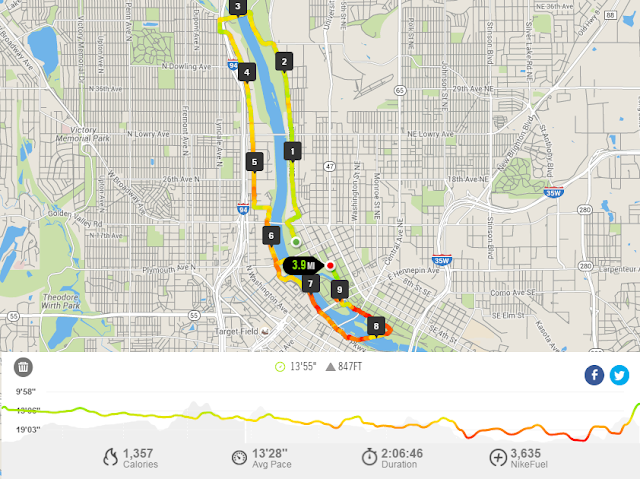 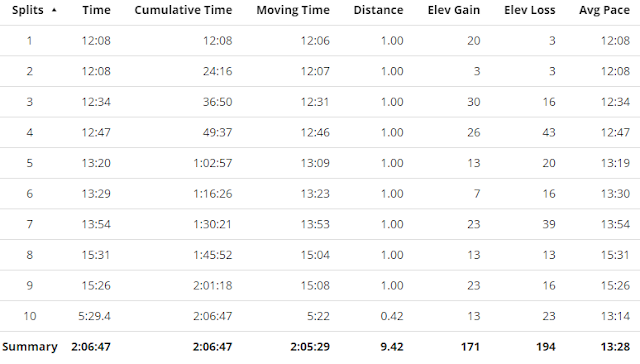 Posted by KimmerBee at 3:48 PM