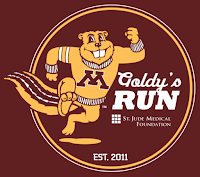 It was a bright cold day on Saturday for our Goldy’s 5K Run. We have done this race 3 years in a row and the weather has always been different. Three years ago, rain; last year, sunny and warm; this year sunny, breezy and cold. This year we had some spectators, Mike and Linda.
The Start
The start was like normal, we run down University Ave. and turn down towards East River Parkway.  The start was kind of slow with all the people running the race and now starting corrals. It was a free-for-all so walkers and strollers were all around us. I managed to keep my pace at around 12 for the first crowded half of mile but once I hit the slight downhill to East River Parway, I kicked up the pace a bit an was running well under 10:30 which is good because it averaged out to an 11:36 mile 1. Not bad, not great.

The Middle
After the first mile, things go a bit interesting. Well not interesting but different. Instead of running circles around campus like years past, we ran across the Mississippi River on the top level (pedestrian level) of the Washington Ave. Bridge (the U of M Bridge). We got to the end of the bridge and ran back. It was different but it was kind of nice. You get a great view of the Mississippi river and it wasn’t shaded which is nice considering it was cold. The bridge was a bit breezy but this bridge is weird because there is an enclosure running down the center of the pedestrian area so it helped to block the windy. My pace stayed consistent and I did really well on the bridge. After the bridge we ran past Coffman Memorial Union and turned to run across another pedestrian bridge. This one was narrow and as a result I had to walk a bit as there was nowhere to go as people walking it were blocking the whole bridge. I know you are walking with your 4 other friends but don’t walk 5 abreast on a narrow bridge!!! ARGH! But it didn’t hurt me too bad as mile 2 came in at 11:49. A bit slower than I’d like but it is still under 12.

The Finish
The last mile was the same as previous years, it loops around campus, down Scholar’s Walk, through Lily Plaza, the half-moon green space by the Engineering Building, past the Field House and Aquatics Center and eventually you pop back on to University Ave. for a short bit before you running around TCF Bank Stadium. This year we ran counterclockwise around. That was different. My watch was acting a bit goofy with all the buildings, I think it got off a bit. But nonetheless I hit mile 3 with a time of 10:21. Say way?  That is what my watch says. I can’t believe it. I mean I picked up my pace once I saw the stadium but did I pick it up by that much? I highly doubt it. I ran across the 50 yard line with a time of 34:34. Unbelievable. That was over 2 minutes faster than last month. My watch said that it was 3.13 miles and my overall pace was 11:03. I still don’t believe it. But I’ve mapped the course on two other “mapping” sites and came up with roughly the same distance of 3.1. Amazing! 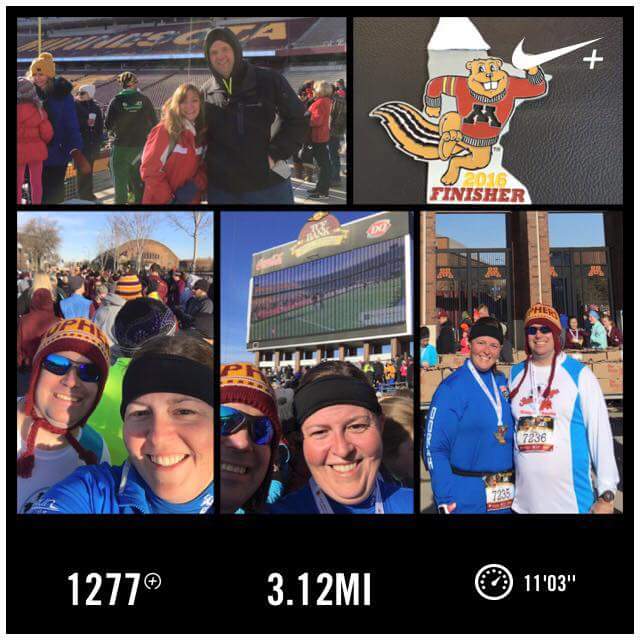 Posted by KimmerBee at 8:21 AM