This was a lonely race. There were only 10 participants in the 10K which meant a for-sure-last-place-finish.

The Start
About 30 minutes before the race it poured. Great! Since the first mile was on the grass it meant wet shoes for the other 5 miles. Great! We walked over to the park to get our stuff and take a group photo. This is the Tractor Central team: 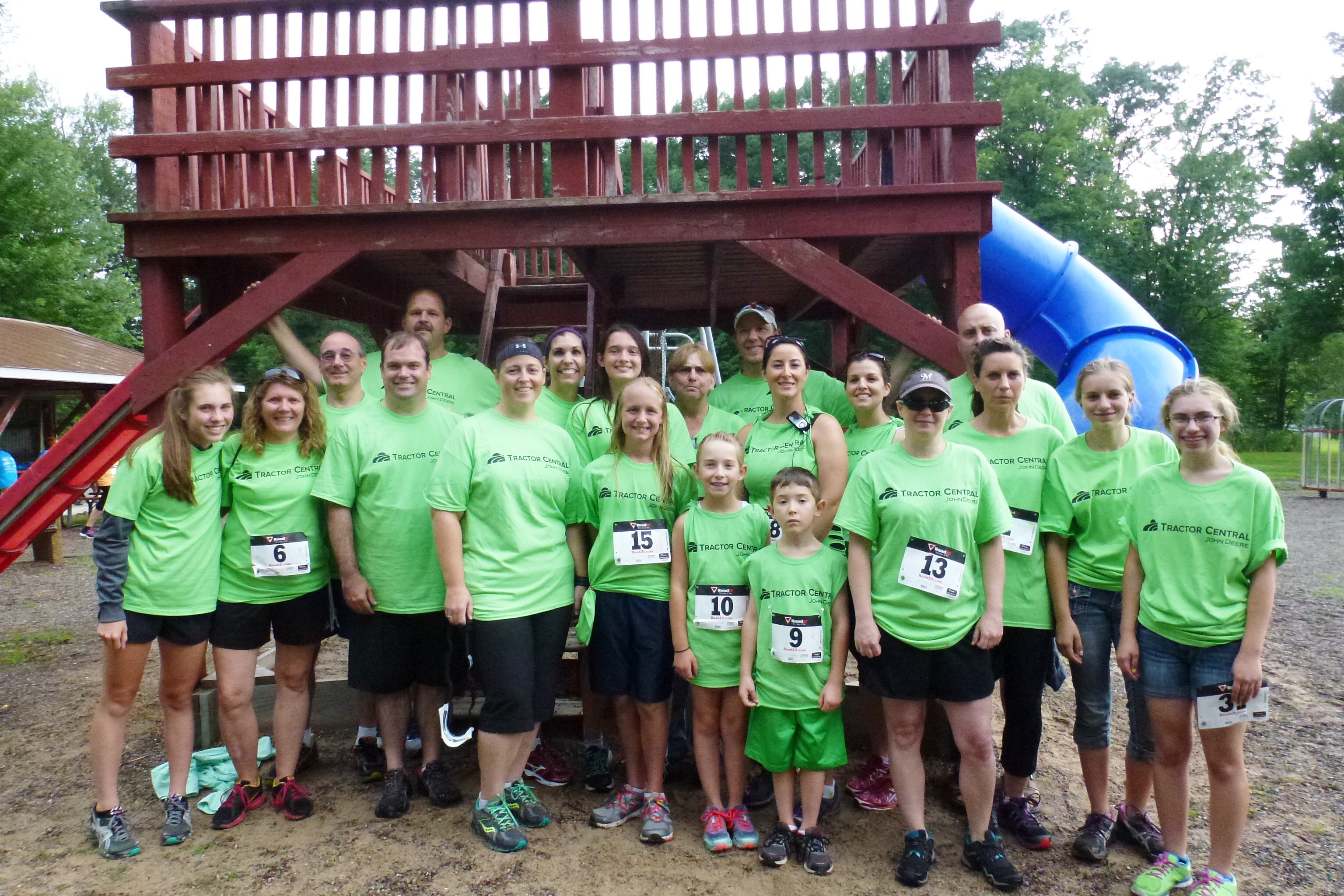 There were 4 of us on the team that did the 10K. The rest did the 5K. The start was simple. Like I said the first mile or so was on an old railroad bed…so old it was grass! And since we got a nice rain shower beforehand it was also muddy. I was never so relieved to get on crushed rock in all my life! Once we got off the railroad bed there was our first water station. It was unmanned so we had to pour our own water. I’ll give them the benefit of the doubt, it was a small race and it was only the second year they have run it. After that it was a stretch of gravel roads.

The Middle
The middle miles of the race (basically miles 2-5) were on the country roads. A very lonely place. It was just me, Eric and the cows. There were a lot of cows and smell. Oh well, welcome to country life. We didn’t see any traffic either. During almost the entire race we were behind the other two 10k runners on the Tractor Central team. We always had them in our sight so that made me feel good. I guess we weren’t always lonely. I’m glad I had Eric there to push me. I would have been in trouble if I was by myself.

The Water Stop
At mile 4 there was a water stop. This one had two guys, one was a medic. They handed us water so that was nice. I did pretty good up to this point. After that we rounded the corner and headed back into town. I started to fall apart at mile 4.5. It makes sense because that is the most I had run in over 2 months so of course I was struggling after that. I took more and more walk breaks. After mile five we finally were on pavement…Thank you GOD! I love pavement.

The Finish
We eventually lost the other two runners when we hit the turns in town. There was a lot of confusing at the finish. The volunteers had us running circles in town and this town isn’t very big (5 streets). The other two girls were wondering where we went because it took us so long to get to the finish line after them. I don’t know if the volunteers thought we were 5K runners because the course we ran, we should have met the two girls as we ran on the same street twice but we didn’t run into them. Around every corner I was hoping for the finish. And it wasn’t there. Eventually we got to the finish. Eric let me finish in front of him so I wasn’t last…wasn’t that nice…and uncharacteristic of him? 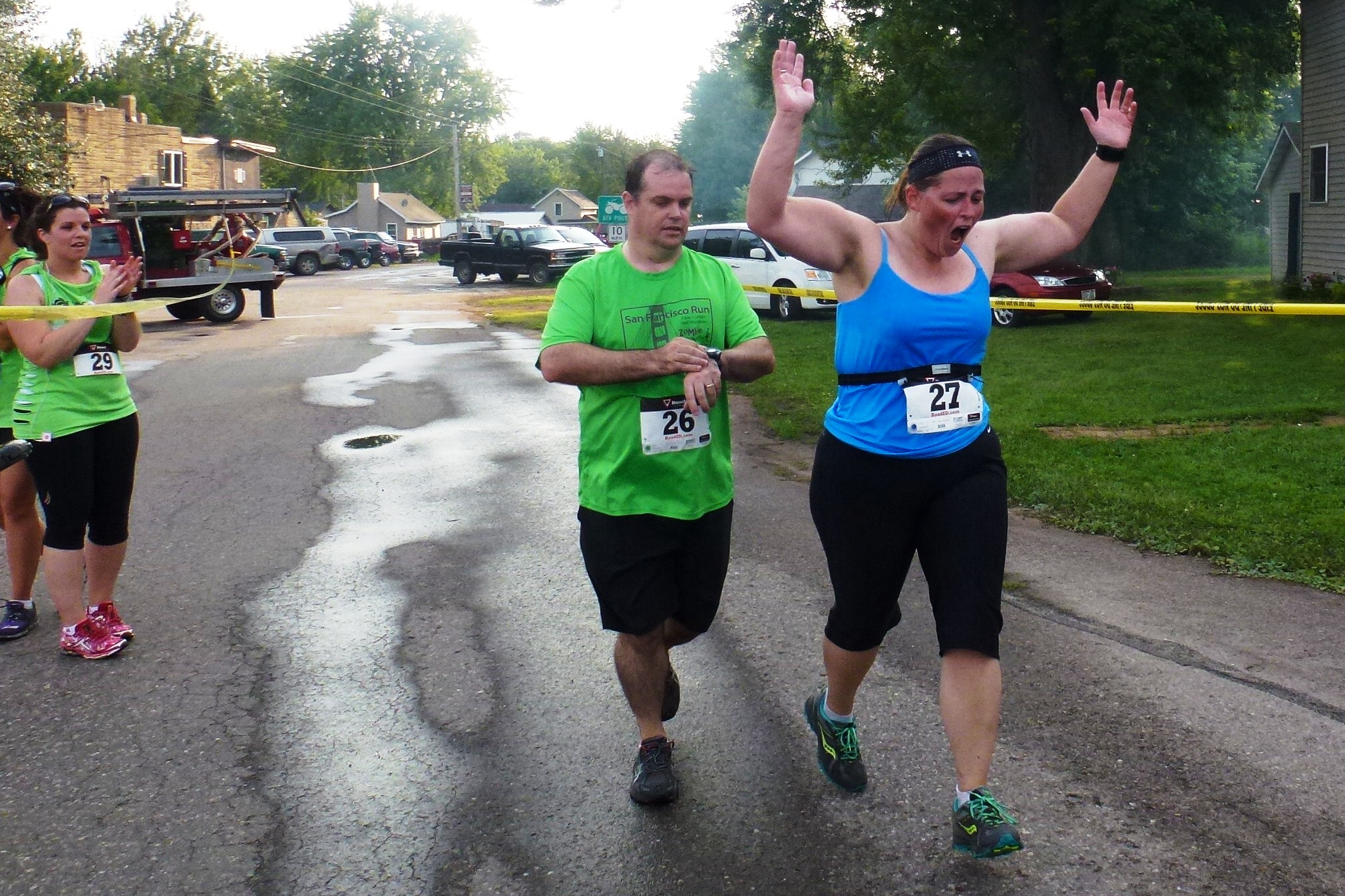 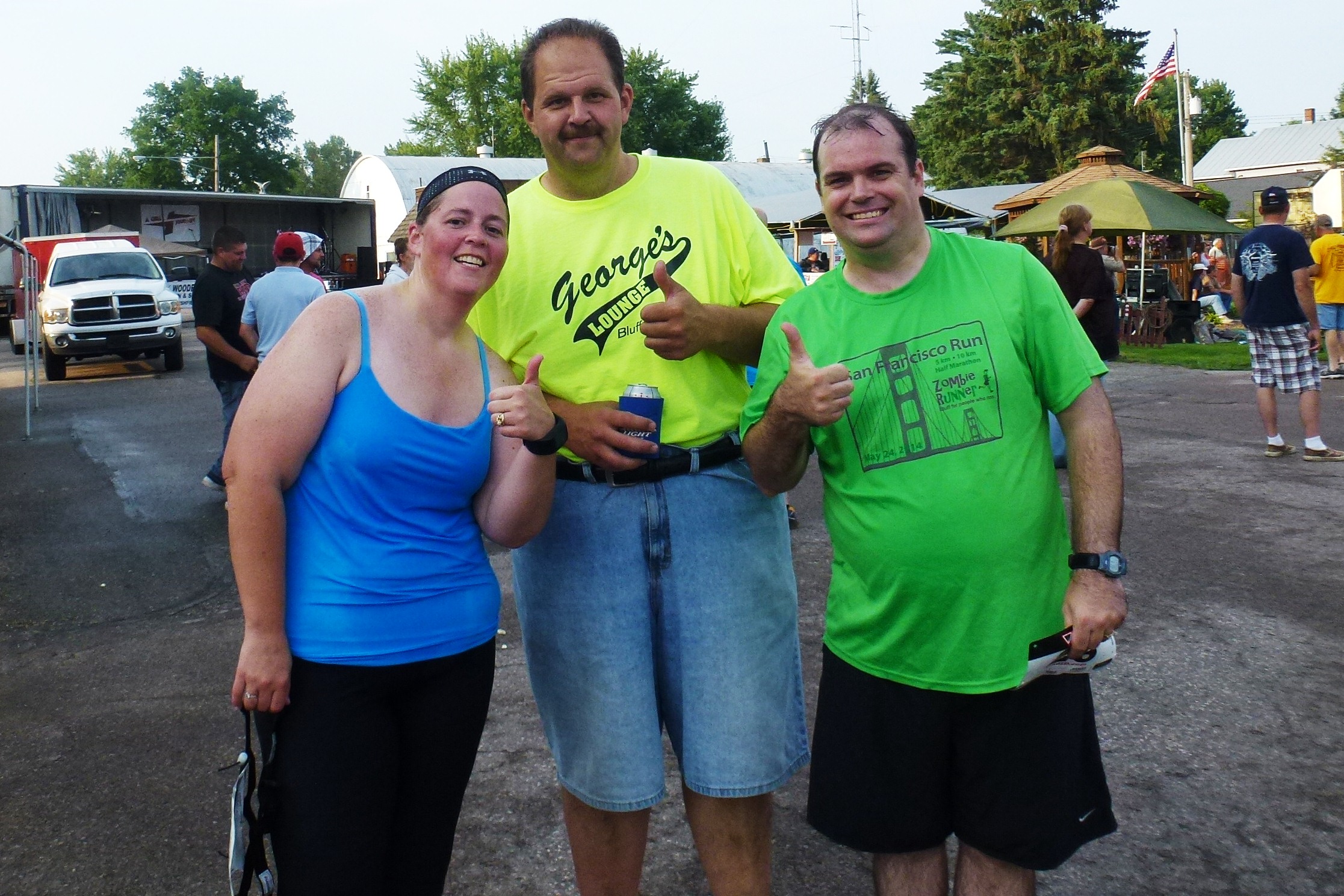 Awards
Being there were only 10 of us doing the 10K, are chances of getting a medal was pretty high. I didn’t plan on it but I thought I had a chance. We both got 3rd place medals. In our age groups...but we are the same age you say? Apparently they thought Eric was 35. So he got 3rd in the 24-35 age category and I got 3rd place for the 36+ age category.

Overall it was good. I need to work on my longer distance again! The temperature really warmed up after the rain and it was humid. I can’t wait to run a 10K on pavement. The two that I have completed have been on grass, dirt, gravel and sand with hardly any pavement. I want pavement!

Here are the splits, you can tell I like pavement because my pace was almost minute faster than the mile before: 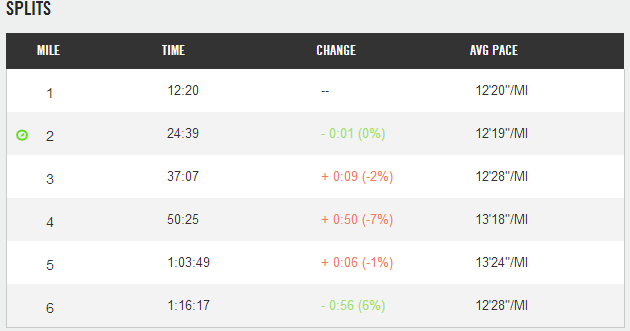 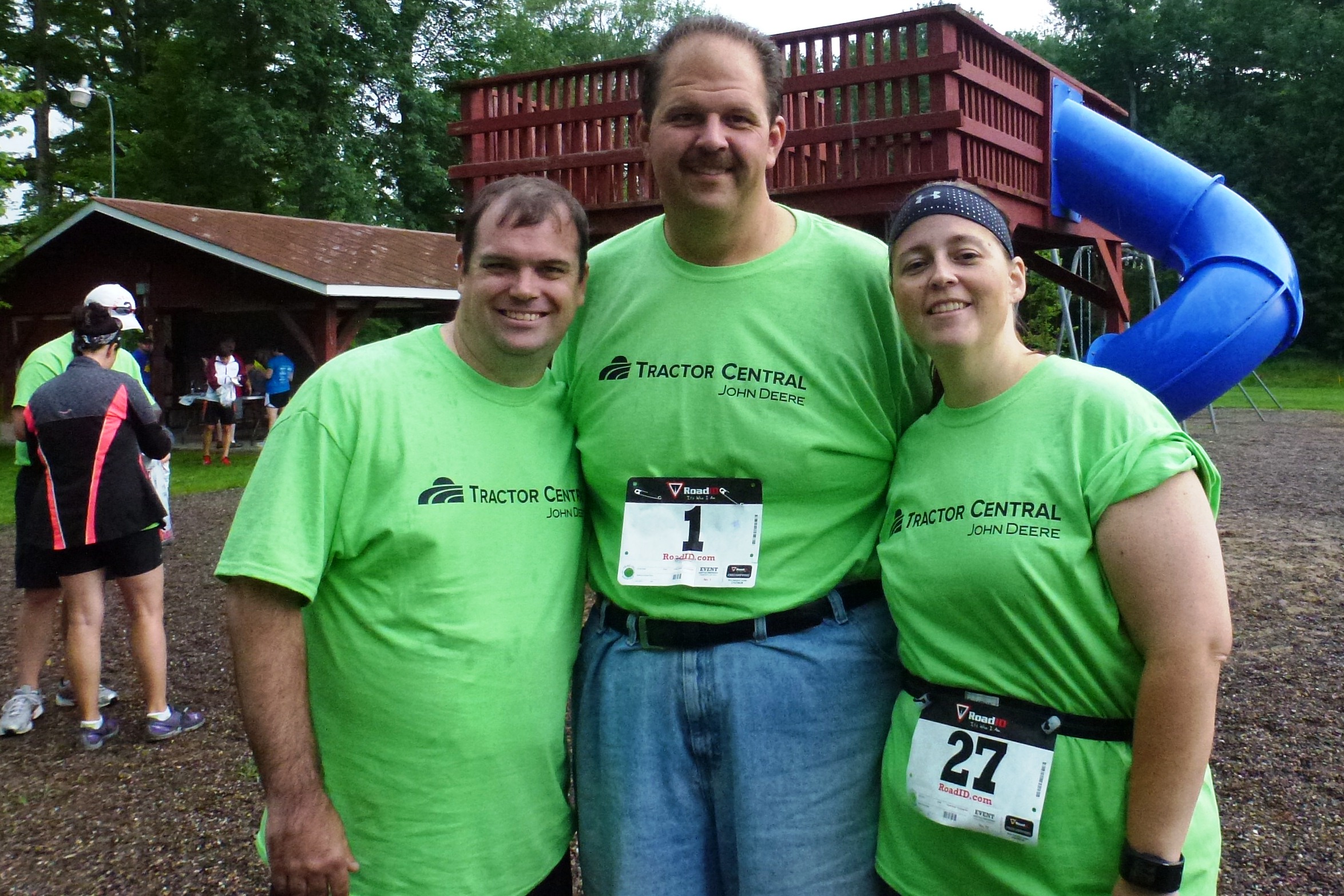 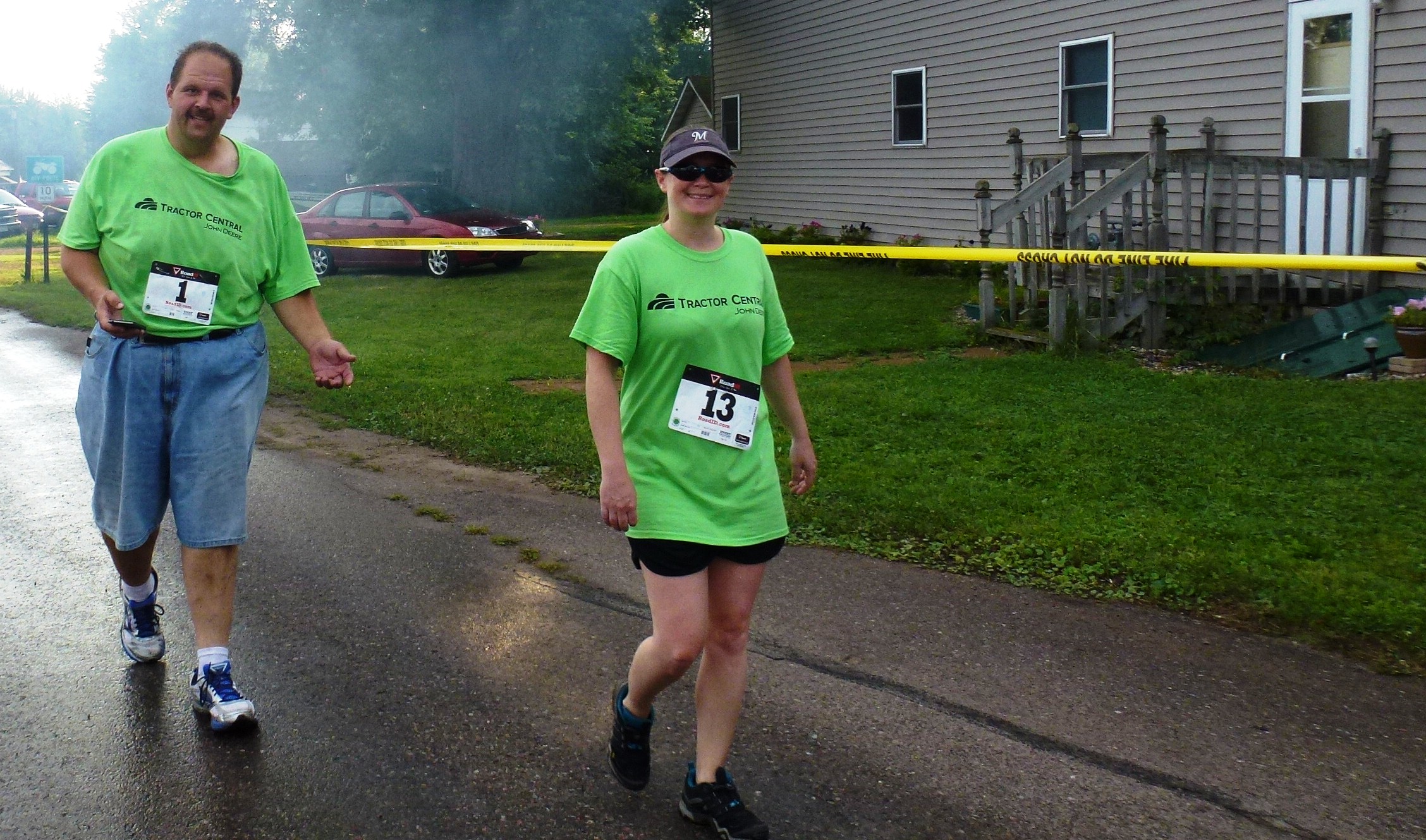 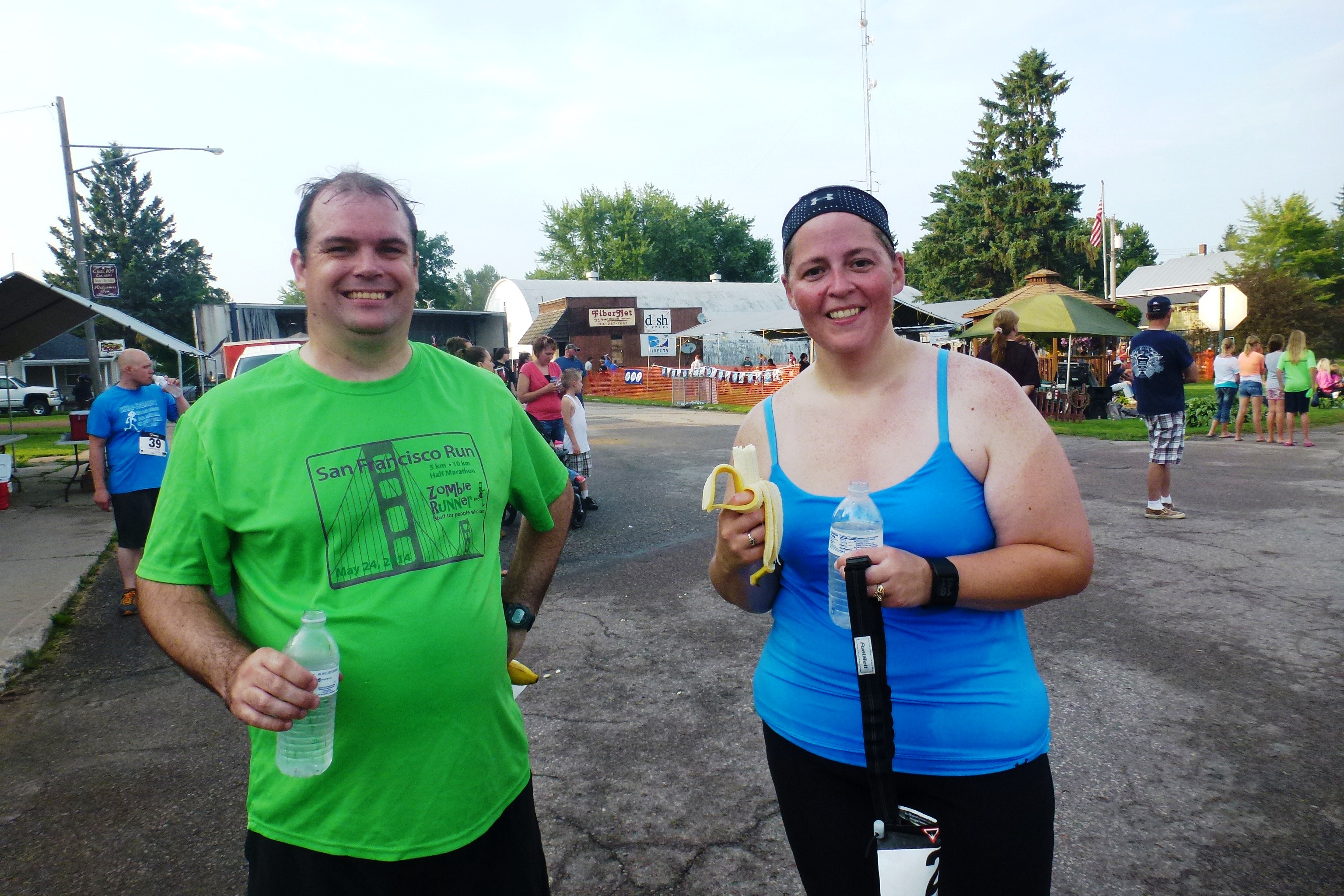 Posted by KimmerBee at 8:11 AM