Since I fell off the blogging bandwagon while in San Francisco, you have to deal with a really long entry now. Sorry!

Night Tour
We started our first night in San Francisco with a Night Tour. We chose the Big Bus Company because they seem to offer the best deal. I’m not too happy with them but I’ll get to that. First off, we were lied to. They told us we had to get on this bus as it was the last night tour bus. That meant we had to sit downstairs and have a crappy view. Well that wasn’t true because there were at least 2 more buses behind us, I think it was a lie to get the bus full. I would have waited for the next bus because I wanted to sit upstairs with the open top but whatever. The other reason I wanted to wait is because what is a night tour if it was not dark at all during the tour?  The tour started at 7pm. It doesn’t get dark for another 90 minutes at the earliest which means that it really isn’t the night now is it? Argh! So I was mad for the whole tour and didn’t take many pictures because what was the point they wouldn’t turn out anyways because we were behind glass. So we crossed the Bay Bridge and went to Treasure Island where we could get our night skyline pictures (even though it was still daylight) and when we got back on the bus somebody had taken our seat. WTF? Some of the people sitting on top got cold and wanted to sit down below now. So I high tailed it to the top and boy that made a huge difference. It was freezing but I got some awesome sunset pictures. And the best part was the traffic was so backed up going into the city that it wasn’t cold sitting on top. Suckers downstairs, you loose. We waited over 30 minutes for a street car back to our hotel. Two street cars that were scheduled never showed up and when one finally showed up it was packed and we were packed like sardines. 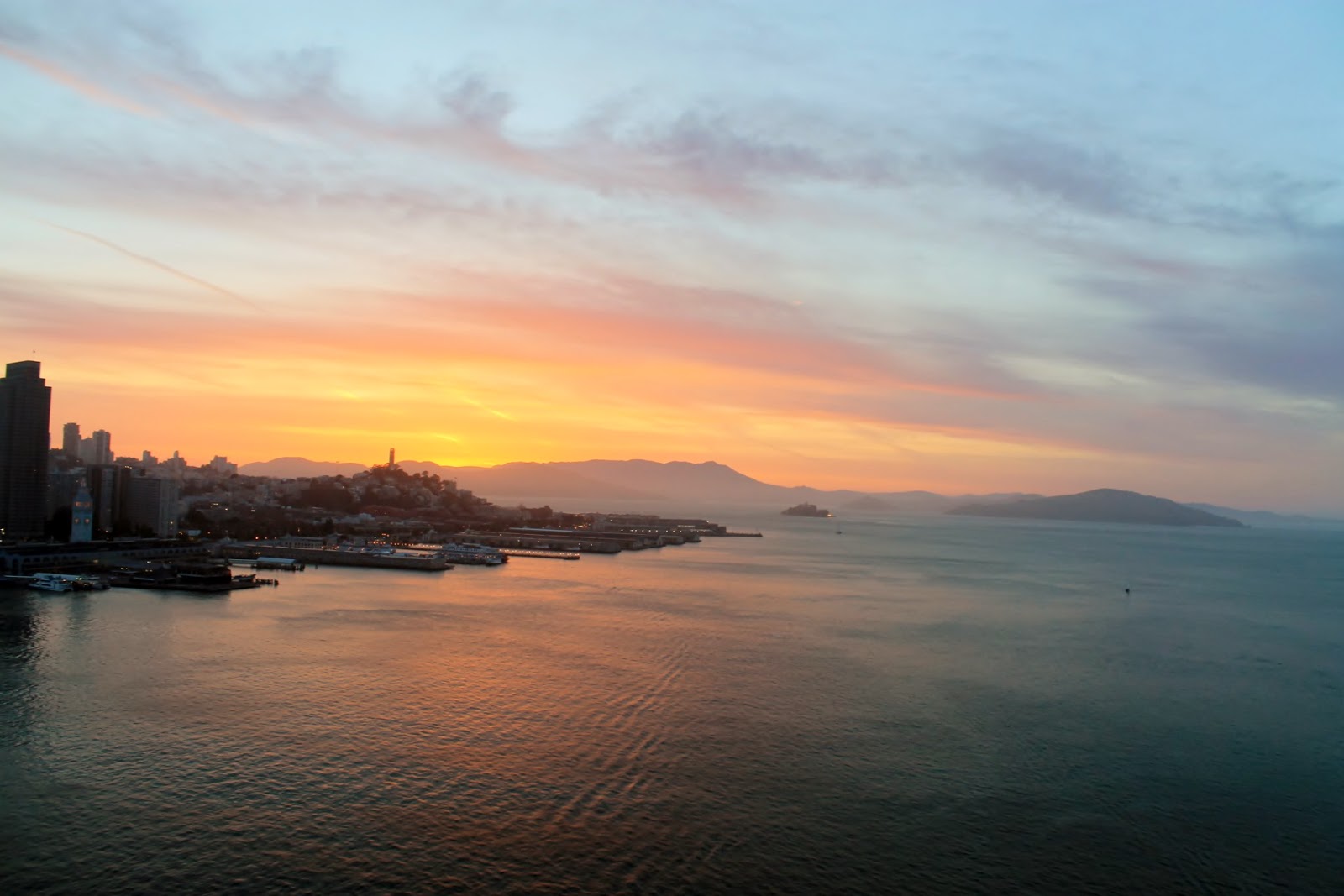 Zombie Runner 10K
Don’t really want to say too much here, my full race report can be found here.

Relaxing
After the 10K, which I did horrible in, we went back to the hotel and relaxed. It took a lot out of us, especially those hills. We both crashed on the bed. Eric took a nap and I uploaded some pictures. I tried to nap but it wasn’t happening.

Alcatraz
We had to get down to Pier 33 by 8:45 for our 9:10 tour of Alcatraz. The tour itself wasn’t bad. We got to see the whole island and hear the history of the prison. The audio tour was quite good, I’m not usually a fan of them but this one didn’t drag on like others I have done. It was fascinating learning about the various escape attempts, the riots and the lives of the guards who lived on the island with their families. It sounds crazy to me that people would let their kids live on an island with a maximum security prison! We managed to see the whole site and were back on the return boat by 11. We walked around Pier 39 for a bit and saw the Sea Lions but we had to get back to the hotel for the Oakland A’s game.
Lines, Lines and more lines
I never hated the Metrodome, I actually kind of liked it and after seeing where the Oakland A’s play, I really loved the old place. The A’s play at O.co also known as the Coliseum. The Coliseum is old, built in the 60s. It is a football first stadium, baseball second. There is nothing fun to look at. It is a maze trying to find your seat and you have to walk through a restaurant to get to your seats. It is just weird and dumpy. The A’s are having a fantastic year and as a result, it was actually a sellout. Unbelievable! Obviously they are not used to sellout crowds because only half of the concession stands were open and the lines were ridiculous. We got to the game late and stood in line for an inning and a half for a hot dog. On a positive note their food prices are pretty cheap, especially compared those across the bay! We watched a few innings and then Eric wanted ice cream. We waited in line for over 2 innings for ice cream. By that time it was the 8th inning (we missed the 7th inning stretch) and we were tired of standing around. The A’s were killing Detroit and so we left after eating the ice cream. I’m sure glad we did, the BART back to San Francisco only runs every 20 minutes (bad planning!) and we got on one right away. When we were heading out of the station, the bridge that connects to the stadium was packed with people heading to the train. I was so glad we beat that crowd. It was amazing!
Finally we walked the bridge!
So after two failed attempts at walking the Golden Gate Bridge, we finally had our chance. We took the BART from the stadium to Civic Center plaza, connected with a bus to the Golden Gate Bridge. We finally got to walk the bridge. It was cold and windy. I knew that but it is something to feel it! We walked about half way and turned around. It was a great site and I’m glad we finally got there. We took a couple buses back to the hotel and crashed. Our vacation was over. We had an early morning wake up call for our flight and we had crazy shuttle bus driver but we got on our early morning flight, thankfully for another successful vacation. 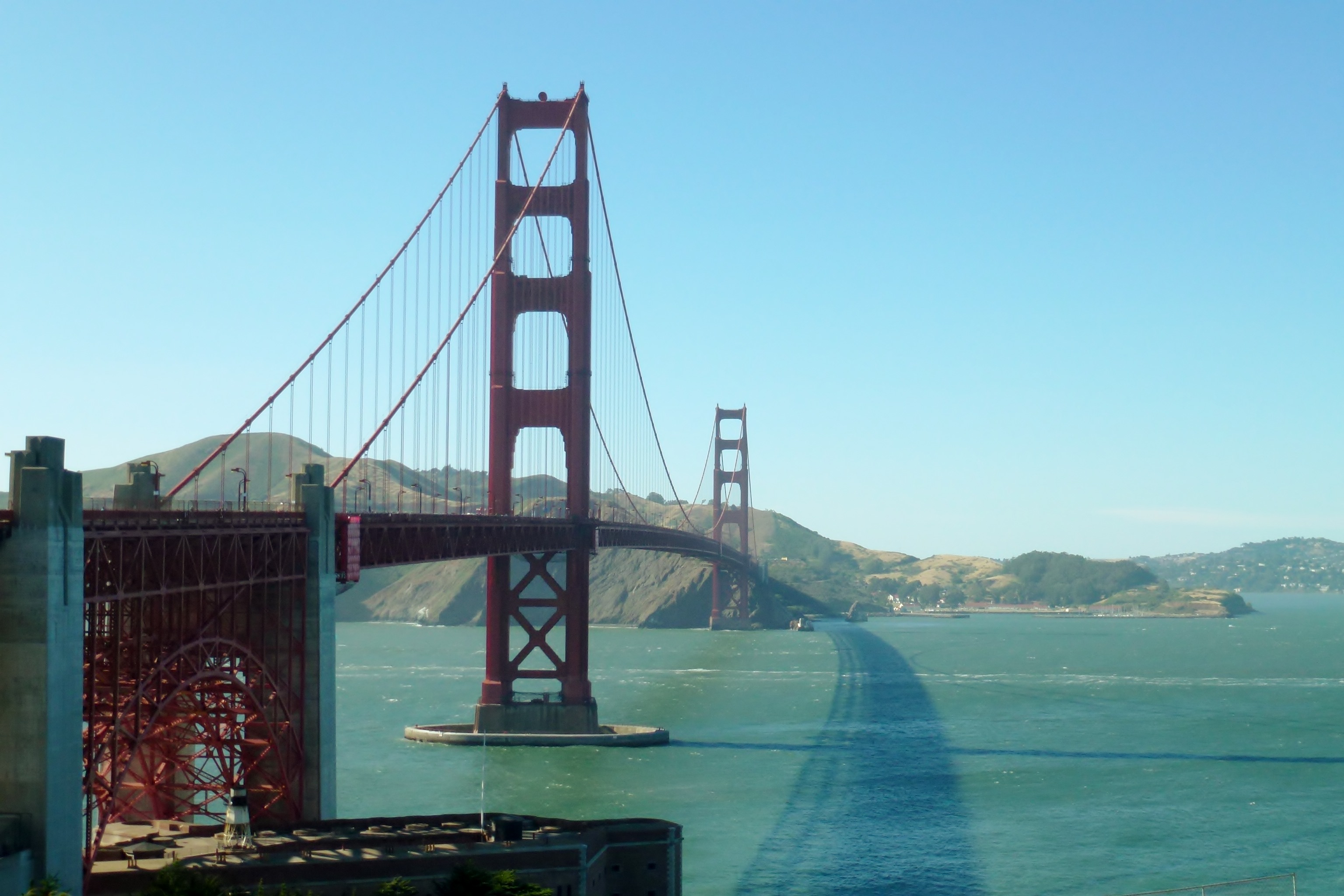