We did it! We braved the -20 degree wind chill weather and ran a 5k.  It wasn’t the most pleasant conditions.  It was cold (obviously) and of course we got snow this week so the course was snow packed and icy.  I really wasn’t sure I wanted to do this.  I did go running a few weeks ago when it was 8…but that was positive degrees.  And I could complain because last year it was 35 degrees for the Reindeer Run so it was really 40+ degrees colder this year.   But I won’t.  Eric and I prepared for this.  We went out to Sports Authority last night and each bought a balaclava (i.e. robber’s masks) and some warm gloves.

I put on a lot of layers.  2 pairs of socks one short, one long.  Long underwear and running pants. 1 T-Shirt, 2 long-sleeve shirts, one of which is really thick, and my Gophers hooded sweatshirt.  The balaclava, neck gator and Laplander hat.  2 pair of gloves.  And my running watch.  I think that was it…quite the outfit!  Thank GOD I didn’t have to pee the whole time I was there…normally I do! 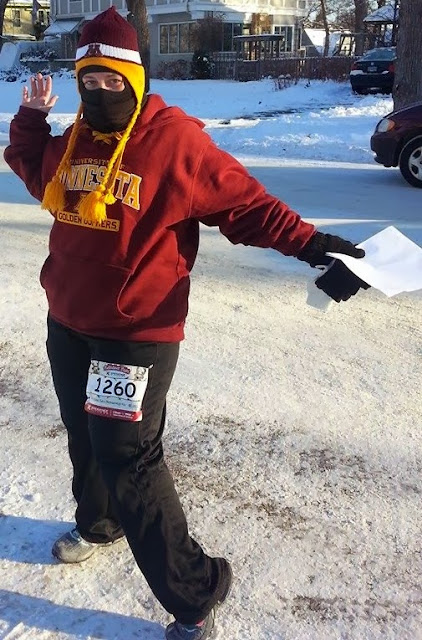 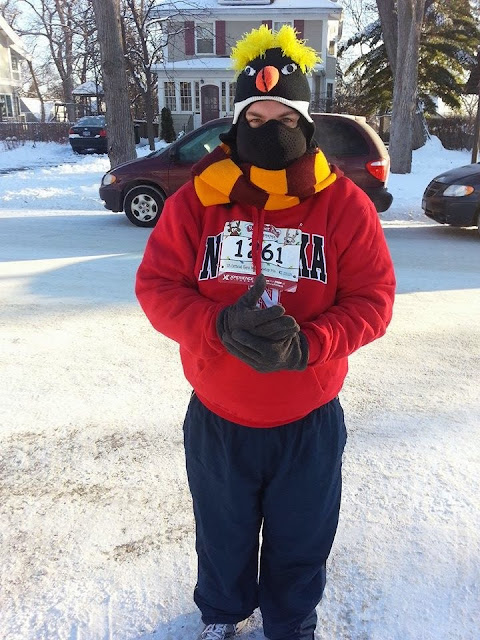 The course was along the banks for Lake Harriet.  I love Lake Harriet but I didn’t spend too much time looking around as I planted my face to the ground to watch for the icy patches.  Behind us were the Marine Corps guys.  They ran in formation and did the military cadence.  One of them fell on the ice.  I felt bad for him. I was glad when they ran past me.

Like normal, after mile 1 I was roasting.  Too many layers again.  First to go was the outer layer of gloves, then the neck gator and finally the Laplander. I would have stripped more but it would have been too difficult.  My pockets on my sweatshirt were full with all the other stuff I took off.  So I trudged on and finished in 43:01…I would have finished under 43 if the stupid women in front of me would have got out of my way!  Santa was at the finished to high-five us but I blew right past him and he slapped me on the back. Here are my splits...

Do you see my icicles? 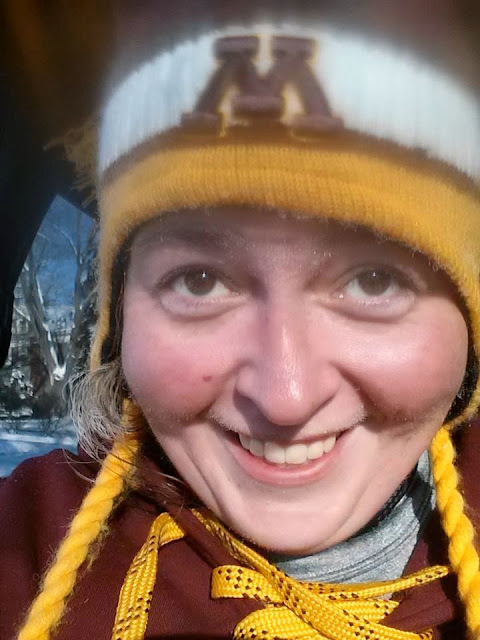 I was feeling pretty good at the end.  I wasn’t cold at all even though it was -5 degrees.  We snagged some water, bananas and hot chocolate and were on our way back home.  It was fun.  I wish it was warmer…

Speaking of warmer…
Our furnace isn’t being very agreeable.  I woke up this morning and it was 59 degrees in the house.  Our furnace is running and the pilot light is lit but it is blowing cold air.  I’m patiently waiting for someone to come check it out.  On the way home from the run we stopped and bought a nice space heater thing so we don’t freeze until they can fix it. I guess I should be happy that the house was still almost 60 degrees considering it could have been much worse…it was -10 degrees most of the night and it is still only 0 degrees.  Praying I don’t need a new furnace…that would really suck!