Wow, my legs are tired today. We had a very busy weekend. Michael and Cassidy came up Thursday evening.  Friday morning, after we took Swirl to the vet, we started our first day of touring. We started out at the Sculpture Garden at the Walker art museum so they could see the famous Spoon and Cherry.  You have probably seen it; the NFL always show it whenever the Vikings are playing on national TV. 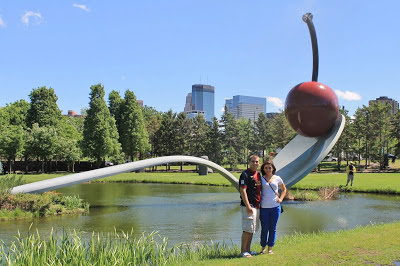 After that we went downtown and had lunch and walked around Nicollet Mall. I took them to the downtown Target to show them the cart escalator. It is a crazy thing but I think it is cool and so did they. We buzzed by the Metrodome so Michael could see the Vikings home.  Next stop was the Guthrie Theater and the Stone Arch bridge followed by the Minnehaha Waterfall. We hiked down to the bottom of the falls and even put our feet in the water.  It was a little cold.  Then the rain came. We ran under a tree but it wasn’t letting up so we darted up the stairs to the car. 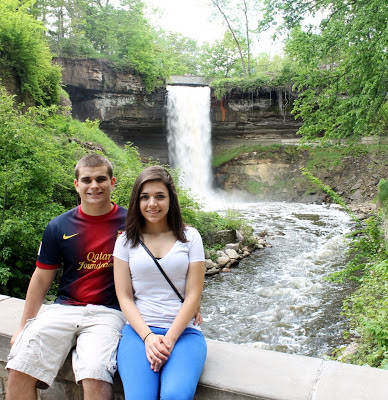 We hit the Mall of America and Nickelodeon Universe. We did a lot of shopping, probably the most I have ever done at the MOA.  It was fun though. We also went on two rides.  It was a fun! After the Mall we headed across the street to IKEA so Michael could get his meatballs.  When they lived in Virginia, they would go to IKEA often and Michael devoured the meatballs.  We bought him some frozen one to take home with him.  (number of steps: 15,545)

Saturday I did a 15 mile bike ride in the morning. We went back downtown, first to the Gophers’ new stadium and shop and then Target Field for a Twins game. 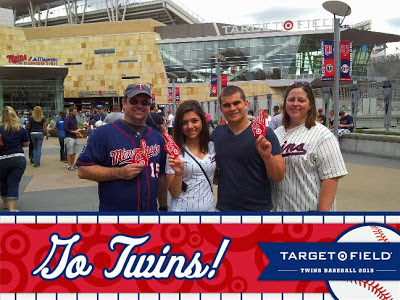 The game was fine but the wind started to really blow and then the rain came. Twins won so that was good! We got a picture of them in the glove.  I love this sculpture! 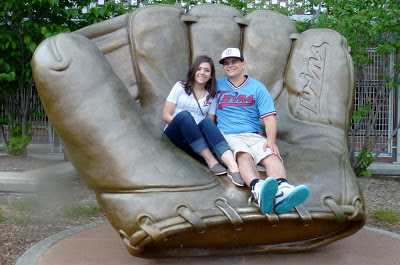 In the evening, DJ, Abbie and Beth stopped by for dinner.  Abbie had a soccer tournament in Maple Grove.  (Her team was undefeated in pool play but lost the championship game on Sunday with 50 seconds left in overtime.) After they left, we made another trip to the Mall of America.  Man, Michael likes to shop!  (number of steps: 23,471)

Yesterday I went for almost a 4 mile run. My GPS watch stopped working and was stuck at 2.73 miles for a few minutes.  When it reconnected with the GPS I was at over 3 miles.  It was pretty amazing I went from 2.73 to like 3.14 in less than 5 seconds!  My fastest pace ever!  The only bad thing is it didn’t get all of my miles logged so it was off by 2 tenths of a mile. After that, we went to Valleyfair and rode a ton rides.  My face got sunburned, I'm so red! And it hurts.  I'm stupid, I didn't think about sun screen. It was cloudy and 60 degrees. Oh well, I'll probably be tan here soon.  After that we just chilled at home. (Number of steps: 18,167)

Posted by KimmerBee at 7:58 AM